The Coach – is this Clerkenwell’s Racine?

I’d come to know and love Henry Harris’ cooking at his previous restaurant Racine on the Brompton road: the best place to eat French bistro food out of France, which sadly closed a few years ago. The gap that Racine has left in Knightsbridge will never be filled but I was delighted to hear he’d transferred his talents to The Coach, in Clerkenwell, where he and his new business partner James McCulloch have renovated an historic pub to create an airy, comfortable space for drinkers, diners and people like me who like to have lunch in a room full of natural light. 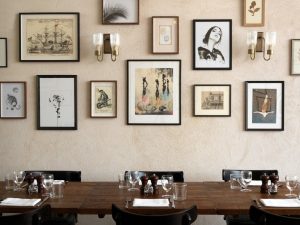 Harris’ cooking will be in good company in Clerkenwell, where simple, unfussy, high quality cooking from restaurants such as The Eagle (said to be London’s first gastropub), Moro, The Quality Chop House and St John have all stood the test of time. The Coach will certainly stand up amongst its peers.

Harris’ cooking has always been about celebrating the best of bistro food – rabbit in mustard; onglet steak and chips – and I was pleased to see that some of his signature dishes were back on the menu.

A nod to contemporary tastes was a vegetarian option: roasted tomatoes and cream originally from a recipe by Pomiane (a 19thC French food writer), evidence that Harris’ influence is firmly based in authentic French traditions even when it comes to catering for modern requirements. Needless to say, I eschewed in favour of other temptations: the prawns and cocktail sauce and a plate of the creamiest calves brains. They were bathed in butter with a surface just browned, toothsome and ambrosial. The contrast of the crisp capers with the custard texture of the brains was sublime.

We ordered the onglet with chips and the famous rabbit with smoked bacon and mustard. This is exactly the sort of food you would travel to France for. The chips were excellent, as was the Stilton butter for both dipping the chips into and smearing on the meat. The rabbit could have done with being a little more tender. I’ll put that down to an inconsistency on the day because I know from Racine that this dish is usually superlative. We ended with a shared crème caramel for pudding, just to make sure his talents still covered desserts, which they did. 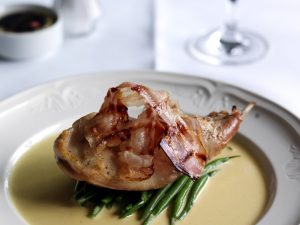 The menu is full of dishes which have a comforting familiarity, because many of them are classics, but are treated with respect and skill. There is a modesty to Harris and an authenticity to his cooking which makes him unusual in its lack of ego. Harris is opening two more restaurants with his partner, two in east London and one in Maida Vale, serving similar food. I look forward to trying the others and it now seems a small price to pay, losing one Racine to gain three new sites.