When a Michelin-starred chef leaves London to open their own place, it makes sense that they choose an area with a thriving food culture. Bruton in Somerset is where Merlin Labron-Johnson went, and his restaurant Osip is a paean to this land: lush dairy farms, apple orchards and hedgerows from a forager’s dream.

I took a friend who had previously owned Bruton House, one of the first restaurants to open in this small town, which has now become an epicentre of food and culture in the south west. She remembered the building from its earlier life, as Mr Windmill’s Ironmonger shop. Now it’s all fresh white walls, hanging dried herbs and wooden shelves with jars of pickles. A comfortable banquette runs along one side of the small, light room; only an old stone fireplace, glimpsed behind, suggests a previous history. 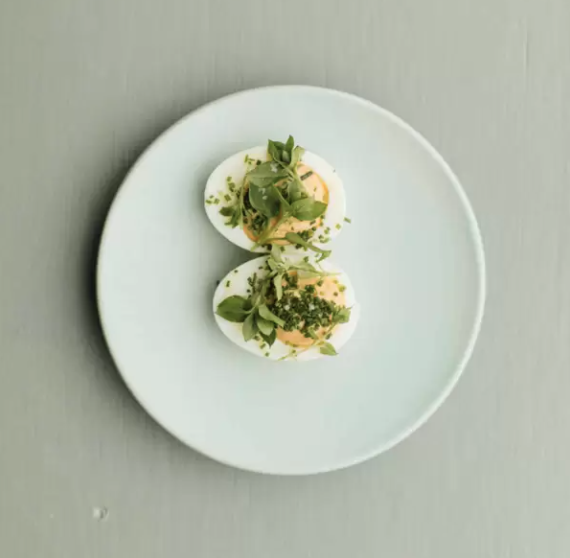 The atmosphere is welcoming and gratifyingly informal, which was lucky as we had two three-year-olds in tow. The food arrived swiftly, some of the smaller plates at the same time. The children guzzled the treacle and ale bread while we were given a ‘taster’ of chicken bone broth, smokey with Lapsang tea and verdant with leek oil. We were off to a good start. A tempting list of non-alcoholic drinks chalked up on a board caught my eye, so we tried their fizzy raspberry shrub and a tart and sweet apple and sorrel juice. I could almost imagine them foraging the hedgerows for the ingredients. We tucked into smoked cheddar puffs: decadent yet petite cheesy mouthfuls – this is cheddar country after all. The egg mimosa was an art work on the stoneware plate: a creamy set white filled with unctuous mayonnaise and scattered with fronds of sweet herbs. But the standout starter was meltingly soft Tamworth lardo wrapped around crunchy, caramelised walnuts.

We ordered the potted pheasant – rich as a duck rillette and just as tasty. It came with more dark, chewy treacle bread, smoked butter and pretty pickles. The kitchen thoughtfully divided the soup of Jerusalem artichokes, roast chicken juice and diver scallops into two bowls, so we could experience it individually. Under an airy blanket of Jerusalem artichokes, cubes of super-fresh, local scallops bathed in intense chicken broth. This dish was a triumph in the combination of flavours, textures and modern in its technique, without being too clever. Roasted celeriac, fresh ricotta, a puree of cavolo nero and preserved lemon was an attractive layering of those ingredients, and covered with chopped nuts for a textural finish. With just enough room for pudding, I chose the creme caramel with raisins plumped in Somerset cider brandy: worth the trip in itself.

This is the sort of restaurant where farm-to-table cooking is in the best possible hands. Labron-Johnson’s skilful and sensitive treatment of Somerset’s produce not only celebrates the area, it endorses a local food philosophy that increasingly makes sense. Both for the environment and our gastronomic pleasures.

This review originally appeared on HouseandGarden.com