James Lowe’s first restaurant Lyles, has been a firm favourite since it opened in 2014. So I headed to Flor, his new venture, with justifiably high expectations. A small site on the edge of Borough Market, Flor takes a different tack to Lyles – moving from multiple course set menus to bar style food “inspired by the buvettes of Paris and the pintxos bars of san Sebastián”. I like this kind of eating: lighter, quicker and less of a commitment. 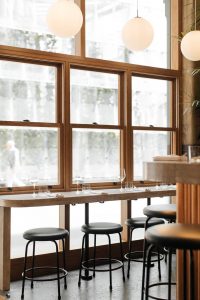 The menu is as 2019 as one could hope: a list of dishes ranging from £2 to £21; between two the waiter suggested we order around five of them. He thankfully didn’t ask us either if we’d eaten there before or if we ‘understood the concept’. Sharing isn’t necessary, so you wouldn’t feel like a uncomfortable on your own, but the dishes are neither too large for one, or too small to share. 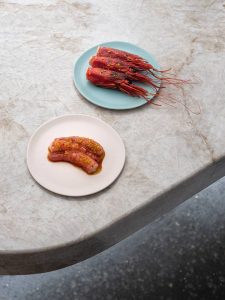 A basket of chewy, sticky crumbed sourdough came in thick slices with golden butter. A plate of wild boar ventricina (salami) was deep red with chilli, the spice perfectly offset by the subtle gamey flavour of the meat. There was a datterini tomato tart with violet aubergine: soft, smokey and sweet, encased in a crisp pastry shell.

had it been my last supper, I wouldn’t have been disappointed

Our waiter advised the mussel flatbread: a small, chewy crusted pizza with plump mussels, garlic and melted Spenwood cheese. Cheese and fish may seem odd, but Lowe’s sense of flavour combination really triumphed in this dish. My companion was squeamish faced with the raw scarlet prawns that I insisted upon, and didn’t regret. Served on two plates: the plump, waxy textured bodies were uncooked and dressed in a citrus kosho, the heads charred on the grill for a crunchy contrast. Anchovy toast, with thin strips of melting lardo and aromatic marjoram came as the finale, and had it been my last supper, I wouldn’t have been disappointed. The anchovies were salty and plump, the lardo rich and unctuous and the marjoram gave it a herbal kick. We had just enough appetite to end with a Sicilian almond granita; crunchy and icy and served with raw and cooked Reine Claude plums.

This is spectacular cooking and the informality of Flor, as well as the prices, will make this a certain success. Not a place for a big group, but somewhere to eat alone or with two. The superlative seasonal ingredients are skilfully prepared and the combinations are both comforting and novel. I’m not a local to Borough, but I’d happily make the trip back for food this good. And a tempting shelf of bakery items caught my attention on the way out: I went home with a paper bag of lardy buns for tea. It felt like two birds with one stone, and another reason to return.

This review originally appeared on HouseandGarden.com