Faviken – could this be the best restaurant in the world?

However much you read about a place or hear other people’s descriptions, nothing really prepares you for your own experience of it. I’d seen the Netflix documentary, read the World’s Best restaurants reviews and dreamed of visiting the extraordinary Faviken Magasinet, a 16 seat restaurant deep in the Swedish countryside. I was fascinated by the ingenuity of the chef, Magnus Nilsson, who returned to his homeland from a rigorous training in France to hunt, shoot and forage for wild, local ingredients and create dishes that bring people from all over the world to eat. Let’s just say, my expectations were pretty high. 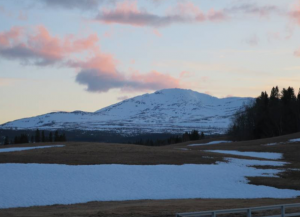 The golden ticket that is a reservation, was finally secured for early May. We left a spring green England and arrived in a Swedish landscape of ice covered tundra. This far north snow remains on the ground for many months, growing seasons are short and preserving by pickling, smoking, drying and salting of ingredients are essential to make them last through winter.

It was just an hour’s drive from the tiny Are Ostersund airport, heading north east into the country, before we entered the Faviken estate. You arrive at group of smart wooden buildings: the restaurant, a large barn-like building painted the rust-red colour you see all over the Skandinavia, and series of decorative wooden houses, all carved gables and boards, belonging to the family who own the estate and used as guest houses for restaurant visitors. Bed and breakfast is optional but it’s a hell of a long way from anywhere and a very tempting choice, albeit it at an extra cost. 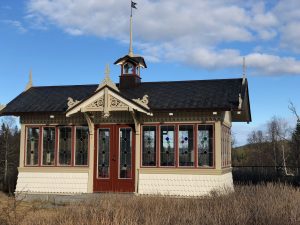 A tipi and a line of sheepskin-strewn chairs were the only things that suggested this may be something other than a traditional Swedish country dwelling. The air was pure and fresh and surprisingly warm despite patches of snow still on the ground and a fresh-faced waitress skipped out of one of the buildings to welcome us. She led us along a path flanked by fires burning in metal baskets towards our guesthouse furnished with more sheepkins, cushions and woven fabrics like a Swedish Robert Kime interior. 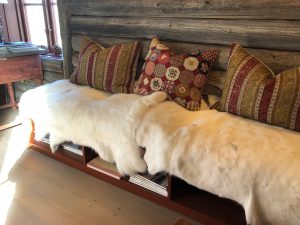 A fire was burning in the hearth and the afternoon sun slanted through the windows. We had a couple hours to relax and snoop around the surrounding buildings. There were walls decorated with furs and wild flowers drying, pickled rowanberries, and other ingredients gathered around the estate lined a shelf in the bar. The only area that remained out of bounds was the dining room, adding extra anticipation to the evening. As I investigated the set up, I was met with such welcome from every waiter, cook and member of staff I came across, whether it was discussing a shelf of pickles with the barman or talking about some hanging sheepskin with a passing waitress. There was a shared pride in everything that was being created there, and an enthusiasm in explaining it all to their guests.

When the time came for dinner we were led, almost ceremoniously, down the path to the restaurant. Holding open the large door was Magnus Nilsson himself: a young hirsute man with the stature of a bear, wild looking and yet humble and almost shy as he welcomed us into the warmly lit room where the evening would begin.

We settled comfortably around a low table in the ground floor bar area. I kicked off with a beer, anticipating the many glasses of wine which would follow (we’d gone for the pairing option) and was brought a rich, malty brew, the perfect match for our first plates of food. Dainty small plates came in quick succession starting with lindseed crackers and mussel mayonnaise. I dipped and scooped with such decadent pleasure and would have licked the pot clean if there had been no one to see. Then came little balls of pigs head in sourdough – creamy and crunchy at once; there were fish roe held in a case of fried black pudding, an extraordinary contrast of deep umami crunch and oily rich eggs; and Spickeskinka, a ham cured in their barns, using only the inside muscle of the pork leg. It was candyfloss light, tender and deeply flavoursome, like some sort of ethereal prosciutto. 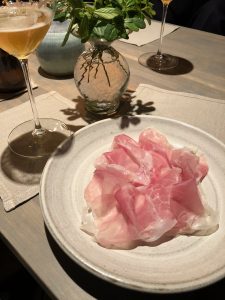 This was just the precursor to our dinner and so far not only faultless but mindblowing. The way Nilsson managed to create so much from seemingly so little, using ingredients all sourced locally despite the lack of produce during the endless winter months. His ingenious skill with these raw materials, whether by preserving berries and fruit from a more abundant time or cooking the fish in a way that seduced it into the gentlest consistency; extracting the nuttiest, sweetest flavour from local dairy products so they took on a new character entirely. Nilsson knows how to craft them into textures and flavours to show them at their very best.

Soon time came for the main part of the meal. We were ushered up a wide wooden staircase into a sparsely furnished low beamed room, curing meat hung from the ceiling, heavy fabrics covered some of the walls and small, windows, like square portholes gave glimpses of the surrounding countryside. Bread was offered immediately, and despite this being the most prosaic of foods, one bite of the chewy dark crust and custard soft interior smeared with creamy yellow butter elevated it to manna from heaven. It exemplified the skill of the restaurant, the rootedness of making sure everything, even the basics are of the highest level. I could live on bread alone if it was always like this.

A loud hand clap announced each course and a short, informative description of what was to come was delivered by various chefs, waitresses and those who I assumed had worked the most closely with the dish. Our table was presented with an enormous scallop shell, laid on a bed of juniper branches like a Christmas wreath. Hand dived from the nearby Norwegian coast (Nilsson is said to travel for 3 hours to make sure he chooses the best) and steamed inside its shell in a briny liquor imbued with the resinous aromas of the branches. Then came a king crab claw and a morsel of ‘almost burnt’ cream, probably one of the best things I put in my mouth that evening. The crab had been cooked with such delicacy that its texture was rendered almost mousse like. The cream, which the chef explained, had hit a very hot pan and been reduced to a nutty sweetness, like butterscotch. There was a piece of cod on a bed of apple matchsticks, dried to an intensified tang, the fish cooked to such succulence you could have eaten it with a spoon.

A brief interlude came with a tiny pancake topped with seaweed and beef butter, soft enough to melt over the top. The lupin curd gratin was an ingenious use of lupin flowers, which contain some sort of vegetable protein, made into a type of silken tofu. A clam’s rich saltiness was offset by the bite of lingonberries. Quail eggs came coated in ash; white asparagus with cream and Finnish fish eggs. Our meat course was veal, neat fillets sliced and served with vegetables reduced to a paste of rich umami.

We were only half way through the meal at this point and the sun was just beginning to set, so after the veal plates were cleared, we wandered onto the balcony to admire the pink sky and the stillness. In most restaurants, if guests left the table mid-meal it would throw the waiting staff into a panic. Not here, instead a waitress brought out a beautiful wooden tray containing our next ‘small dish’ of creamy cow’s milk with meadowsweet for us to eat in our hands overlooking the setting sun.

Retuning to our table, things were starting to take a sweeter note, even though the ingredients used were savoury. A tiny, sweet puff that crunched satisfyingly in my mouth, oozing a dense caramel was actually made completely from potato, while a preserved egg yolk with toasted crumbs made from pine bark –was crunchy and creamy at once, with a hint of the forest.

There was good pace and rhythm to the dinner, I never felt too full or had to wait too long between 25? courses. Maintaining a sense of flow, we were led back down to the bar for the finale. It’s important not to feel static during a great meal and these changes of scene suggest the entering of a new phase of the evening. The plates served here were smaller and we helped ourselves, like dessert canapés. Raspberry ice, wrapped in wax paper tasted more like raspberry that the raw fruit. Bone marrow pudding came ignited in a mini copper pot with frozen milk to cool the hot rice. The pickled and semi dried root vegetables were sweeter than most fruit, and finally came an assortment of candies that read like a fairy tale of foraged bounty: meadowsweet candy, dried rowanberries and black currants, sunflower nougat and smoked caramel.

It was only 10:30pm and as we wandered out to sit around the fire burning inside the tipi, I could see the chefs walking along the paths, no doubt preparing for tomorrows guests. These guests too will come with their own expectations, no doubt informed as I was by many accounts of this magical restaurant. Now it would be my turn to try to explain that beyond the skill of the kitchen, this remote and wild place feels as welcoming as a home. The one thing I won’t even try to prepare you for though, is the extraordinary Faviken breakfast served the next morning. That’s something to discover for yourself.

This article originally appeared in House and Garden